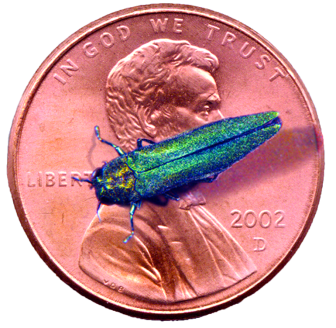 Emerald ash borer (EAB) is a non-native insect pest that infests and kills all species of ash trees. With 24.7 million ash trees, approximately 9 percent of New Jersey forests are susceptible to emerald ash borer attacks. Although rarely the most abundant tree in a forest stand, ash is still found in 24 percent of all forest land. The greatest numbers of ash trees can be found in the northern part of the state. Ash is also commonly planted along streets, as landscape trees in yards, and in parks throughout the state.

Infestations of the Emerald Ash Borer throughout the U.S. and Canada have killed tens of millions of ash trees since 2002.

If you need additional information or assistance, please contact the Burlington County Division of Mosquito Control at: 609-265-5064 or by email.